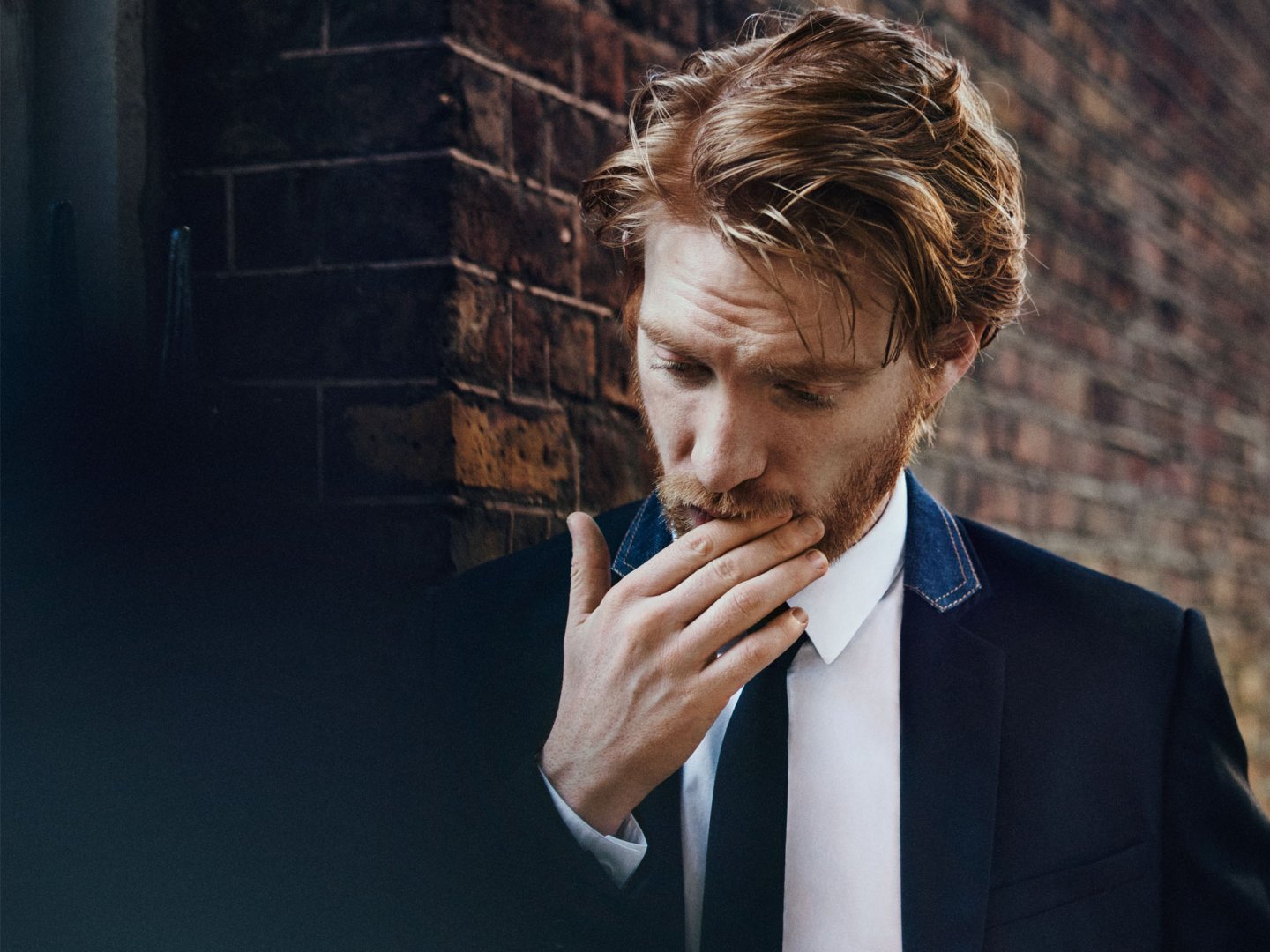 In the midst of this awards season I would like to take a momentary break from my usual opinions and Oscar Derby updates in order to draw attention to one particular individual whom I feel needs special recognition for being (what I will hereby term) MVP Supporting Player of the Year.

If you’ve been following my Oscar Derby at all in the past few weeks, you may suspect that I must be talking about none other than Irish actor Domhnall Gleeson. And you would be completely right! (Also, I realize the title of this very post may have given that away a bit…)

Yes, as I’m sure the other Killer Moose will no doubt heartily attest, for the past couple months I pretty much have not shut-up about Domhnall Gleeson. Why?

Answer: Because he has appeared in FOUR different award-nominated films this past year. Thats right — over the course of 2015 Mr. Gleeson appeared in Ex Machina, Brooklyn, Star Wars: The Force Awakens, and The Revenant.

And a running theme I noticed throughout these four very different movies? Domhnall Gleeson apparently can’t have nice things!

WARNING: This is about to get specific and spoilery!

So quiet good guy Caleb seemingly wins a “company lottery” and is helicoptered out to the Jurassic Park island by his reclusive, brilliant boss (for super mysterious reasons).

That is when Caleb meets Nathan. Nathan is his reclusive, brilliant boss. Nathan has a hidden bunker on this island he apparently purchased from John Hammond. Nathan is a jockish tech genius. Nathan is also a crazy asshole.

Nathan informs Caleb that he was brought to the island bunker in order to perform a Turing test on an A.I. Nathan has created. Caleb is then introduced to Ava (the AI in question). Caleb proceeds to engage with Ava and, as their “sessions” progress, finds himself falling for her. Meanwhile Caleb will simultaneously be subjected to all kinds of bizarre mind-fuckery and dance sequences from Nathan.

Quiet good guy Caleb will begin to believe he can help Ava escape, and that they can run away together. Caleb then will actually help Ava escape… And then Caleb will wind up abandoned by her, trapped in Nathan’s crazy bunker (with a stabbed-to-death Nathan), essentially left to die horribly all alone.

Jim is a catch. The entire point behind Jim as a character is that he’s a catch.

Jim is a legit nice, well-to-do, educated young man about to inherit a nice house in the Irish countryside all to himself. Jim’s story (as we are told) it is that he was engaged, but called it off because he felt the woman wasn’t serious about it.

Jim then meets our smart and steely heroine Eilis and, not knowing she’s already secretly married, begins courting her. Now because Eilis is (understandably and sympathetically) struggling with more than a few complicated feelings, she proceeds to effectively return all of Jim’s sentiments…

… until she decides to return to her life in America, leaving Jim very suddenly with nothing but a short goodbye note slipped under his door. Sigh. Poor jilted Jim.

Poor Hux. For starters, he has to put up with Kylo Ren stalking around, destroying all of his equipment. That has to be frustrating.

But! Despite his (no doubt high) volume of console replacement bills, Hux always stayed on task. He had an epic murdery plan all in place to do all kinds of awful murdery things! Hell, he even had his winter wardrobe perfectly selected for the occasion!

Then his (no doubt expensive) icy murder planet went and blew up, along with his entire army of special brainwashed Storm Troopers, thus ruining his carefully constructed plans of extermination.

And insult to injury, he had to stoop to rescuing frenemy bane of his existence Kylo Ren instead of just leaving him to die along with all of Hux’s ginger-Nazi dreams of galactic domination.

He’s been sent out into the snowy wilds on a a trapping run, and winds up leading around a bunch of cranky, shitty dudes who really don’t like listening to him. Plus there is a constant threat of violent attacks from hostile area natives, and he has to contend with Fitzgerald tirelessly insisting on being The Worst Person Ever. Then he loses his guide(s) due to bear mauling (and people being terrible).

Nonetheless he soldiers on through the awful snowy wilderness, makes it safely back to his tiny fort where he’s been stuck waiting for supplies, and he still has to deal with Fitzgerald. He’s broke; his supplies are delayed; and then he finds out that two of his hired men lied to him about doing the one thing he paid exorbitantly to do (i.e. keep Glass alive.)

By the time he sets out on a hunt for a fleeing Fitzgerald, he is a bit crazy-ragey (but, once again, is wearing a fabulous winter outfit!) And of course because it is The Revenant he finally gets shot, scalped, used as a prop for a trap, and then shot again.

So that’s four movies in a single year of things not going well for poor Domhnall.

Then I realized even if you go back a couple years, this trend totally has precedence! No, it’s not every single movie; but when you consider how many films he’s had significant roles in vs. how many times things go terribly in them, the ratio is still pretty startling. (And hilarious.)

In the crash, Phil suffers a major head injury. And while he does manage to somewhat recover from said head injury, he is also stuck on a raft in the ocean with two other guys (and a decent number of sharks). Cue your standard lack of food and water… not to mention an abundance of sun (and if you look at Phil’s complexion, Phil can’t handle an abundance of sun very well).

On top of all that, Phil and his starving compatriots are then shot at by an enemy plane, are nearly eaten by the sharks, are shot at again by the enemy plane… and then one of them dies.

After 45 total days of bobbing around, Phil and our generic main character are rescued by an enemy ship. They are taken to a small camp in the jungle, held in a shed, beaten, starved, and at one point are forced to strip naked and be doused in buckets of cold water. Following that, they are taken to Tokyo blindfolded. And this is where Phil is separated from Generic Main Character. WE DO NOT SEE PHIL AGAIN AT ALL FOR THE REST OF THE MOVIE.

Technically speaking his character does live, but this is only told through epilogue text after the film has ended.

Well Ash dies in the first minutes, so I suppose I could just rest it there… But let’s make it worse and also point out that he “returns” as an advanced artificial intelligence brought into being / created-to-order by Ash’s grieving partner Martha as an attempt to cope.

In what proves to be kind of twisted, sadly ironic callback to the beginning of the episode, A.I. Ash winds up locked away in an attic.

Yeah ok. So I suppose technically speaking Levin winds up happy in the end… But DEAR GOD you have to admit that he does spend almost all of this film moping around (even if it is in a fabulous beard and very shiny hair!) (Also again with the wintery wardrobe…)

In all honesty, every thing I’ve ever seen The Young Gleeson in he has been 1) completely different  2) always great, and yet  3) never the focus-pulling performance. Some actors just seem to have that quality (and it’s not necessarily a bad one). There is a place for those who steadily, consistently turn out great performances, yet never seem to pull as much attention. However it becomes easy to overlook/forget about these folk, despite the fact that they are often doing work equally phenomenal as their more readily recognized co-stars.

So I say we all band together and just remember to not forget Domhnall Gleeson, and hope that perhaps the new year will bring a few more nice things for him (because he definitely needs it before Hux reaches his inevitably terrible end!)