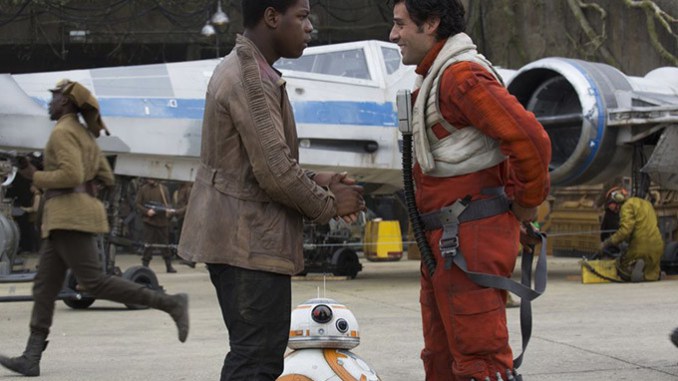 This was a part of a series I originally did as part of Killer Moose. Feel free to go read the other Parts (by other contributors) starting here.

I want to take a moment to discuss immediate connections in Star Wars: The Force Awakens. I want a moment to cheers to a heroic relationship of love born through trials, tribulations, and mutual respect.

I, of course, am talking about ex-stormtrooper Finn and ace pilot Poe Dameron.

“Why are you doing this?”

“Because it’s the right thing to do.”

Yes, from that first moment of derptastically absconding with a TIE fighter, a friendship sparked.

Not only did it spark, but it did so rather profoundly. Consider that Poe is the one who gives Finn his very name. In the first thirty minutes Poe Dameron, quite literally, supplies our would-be hero with an identity, and with that a template for how to grow into it. When their stolen ship crashes, Finn loses what is essentially his very first friend ever, and proceeds to wear and carry Poe’s jacket for the rest of the film. In a way that jacket becomes a lingering reminder to Finn that he has a name now, he has an identity, he had a friend (however briefly), and he can be something else. He very literally dons the clothes of a hero. Upon their reunion Poe tells Finn to keep the jacket — an affirmation of Finn being one of the good guys now. Poe is the one that gives all of that to him.

Still doubt the bromance? Well I have two other questions:

1) To whom does a searching Finn run across a crowded landing field for a relieved and ecstatic reunion? (Answer: That would be Poe Dameron, thank you very much.)

2) Who chases after a wounded and unconscious Finn upon the bittersweet return to the Resistance base? (Answer: Once again it is Poe Dameron, ladies and gentlemen.)

Listen — there is shockingly little in the way of non-toxic masculinity in film. Period. Especially amongst the silver screen’s male heroes. So in a property as massive and far-reaching as Star Wars, it is refreshing to have a sincere, funny, heroic friendship between two men that lacks either oblivious homoerotic subtext or ingrained phobias about what constitutes a “proper” male friendship. (Note: when I say “oblivious homoerotic subtext,” this absolutely does not mean that Poe and Finn could never pursue a romantic relationship in the future! That is a completely different matter, and not the same thing.) (After all, we all know Poe is so thoroughly, wonderfully gay!)

I want to believe that while Rey is off doing her badass Jedi training thing, it is Poe and Finn who will pal around on further broventures across the galaxy, being as effective as they can be, trying to hold shit together long enough for our fabulous lady to return and kick serious ass. Hell, maybe Poe will get captured again! He seems like he’d be capture-prone…

So cheers to Finn and Poe Dameron! Our heroic and sweet dynamic duo!

If Finn and Poe are the heroic and sweet duo for whom we see the very beginnings, then working on a completely different level is the fascinating Kylo Ren + General Hux dynamic.

We get the sense from the start that Kylo Ren could kill General Hux any ol’ time he wants — after all, Kylo is a sad stormcloud Jedi with a lightsaber while Hux is a mere snarly ginger with shiny boots. And Kylo certainly seems like he wants to kill Hux… I mean c’mon — Hux believes in such silly things like “management” and “having a plan.” Conversely, it’s difficult to escape the feeling that the rigid and hyper-organized Hux’s life is made considerably more aggravating by Kylo Ren’s entire temper-tantrum-throwing existence. Let’s be real — how many consoles and other equipment has Hux probably had to replace because of lightsaber damage?

However, we also get the sense that Kylo Ren is probably not allowed to lightsaber Hux in half, and Hux is not allowed to jettison Kylo from an airlock. Oh sure, we could believe that it’s probably because of Snoke… or! maybe! deep deep deep down perhaps they don’t want to kill each other for real.

Which brings me to my posit: Kylo and Hux are secretly bizarre besties.

From their shared affinity for high dark collars… to every snide side-eye here and annoyed near-eye-roll there… From their common penchant to stride swiftly everywhere!… to every tiny disdainful grimace at one another’s tactics… They are the hateful, squabbling banes of one another’s existence — which can only mean they are true loves.

Well these two are presumably making their way to whatever creepy grey-hued bunker Snoke is living in… So I think I find myself wishing that the two of them somehow get lost or detained/detoured at some point which would only treat us to the most twisted and glorious subplot called On the Road: The Dark Side (debate amongst yourselves who is the Bing Crosby and who is the Bob Hope.)*

Basically consider: these two could barely stand one another when they were sharing personal space on a giant ship and a planet, and things were lookin’ up for their whole villainous cause… So what happens now that all of that blew up in their faces? Quite literally. Personally, I’m foreseeing some strain on the relationship…

So cheers to Kylo Ren and General Hux! One another’s ultimate curse and perfect counterpoint!

*Bonus points and a possible prize to anyone who writes me a song for these two to the tune of “Road to Morocco.”**